Are you doing a complete redesign of your site, or planning a redesign soon? Maybe you want more conversions and you think that a redesign is the solution? I am afraid I have bad news. The chances are good that your new site will make little or no difference. It might even cause your conversions to plummet. For a 7 or 8 figure e-commerce store, too much change at once can kill your conversions.

A redesign can easily cost (tens of) thousands of dollars. In the case of Marks & Spencer, their new site cost £150 million (yes, you read it right: million). Two years of hard work went into it. The result? Eight percent fewer conversions. Think twice before you cheerfully start a redesign. Unfortunately, Marks & Spencer is not an exception. We’ve seen this for almost every redesign project we witnessed but were not actively involved in. Usually we get called in when the harm is done: the new site is live but isn’t living up to the expectations (i.e. the revenue is down) and now they want us to fix it.

Some Bad Reasons For A New Design

The decision to build a new site is often based on the wrong reasons. Do you see yourself in one of the scenarios below?

You’re tired of it

You have to look at your site every day, and you’ve had enough of it. Remember that you might be tired of your site, but that doesn’t mean that the customer is sick of it. Your customer doesn’t visit every day. And a returning customer is likely to find it handy that they can quickly find everything they’re looking for because they know their way.

Your competitor’s is prettier

Okay, that’s possible. But first, looking prettier is a subjective matter and not a good basis for a business decision. Second, it might well look prettier, but you don’t know whether it converts better. Don’t just assume that your competitor has optimized their site for conversions. More to the point, never just copy something from your competitor’s site. The chance is good that they don’t actually know what they are doing.

You see parallax scrolling, video backgrounds, ghost buttons and other fancy things appearing everywhere. In comparison with those bells and whistles, your website looks hopelessly dated. So you want to redesign your site with the newest trends. Hold your horses! Now you are confusing trendy design with a well-converting design. Ghost buttons are in, but they aren’t typically a good idea for conversions.

Don’ t confuse trendy with converting. You see ghost buttons turning up everywhere at the moment. But they are usually as good as invisible. And you don’t want that for a button, right?

Why A Radical Redesign Can Go Disastrously Wrong

Any SEO specialist will tell you that a radical redesign has to be handled carefully at the SEO level. An approach that has not been completely thought through can tank your rankings. But there are various other (CRO) reasons why a radical redesign can go wrong:

Too much change all at once

Too little feedback from your visitors

Many radical redesigns are done by ‘the elite’. They are done by a designer, developer, and marketer. But without input from the visitor. Without user testing. Without insights. On gut instinct alone or out of aesthetic considerations. But your visitor has no input.

Designers are not conversion experts

Designers excel at their craft by creating something new, beautiful, and innovative. And they are good at that. They studied for that and put their hearts and souls into that. But they are not conversion experts. It isn’t true that because something looks fancy that it converts better. Don’t misunderstand me, a good-looking site is important. I’m certainly not promoting ugly sites. But I do want to promote having a site that works; a site that converts. That is more important than whether it looks fancy. And for that, you need a conversion expert.

A redesign process is a long one, with many parties involved who often have opposing ideas. The result is endless discussions that don’t move your redesign forward. The designer versus the marketer. The marketer versus the CEO. Everyone has an opinion. Unfortunately, it’s just that: an opinion. It’s not based on insight into the visitor, and that seldom leads to a good redesign. The only opinion that really matters is your visitor’s. Unfortunately, they’re often not involved in the process, and their opinion isn’t heard. 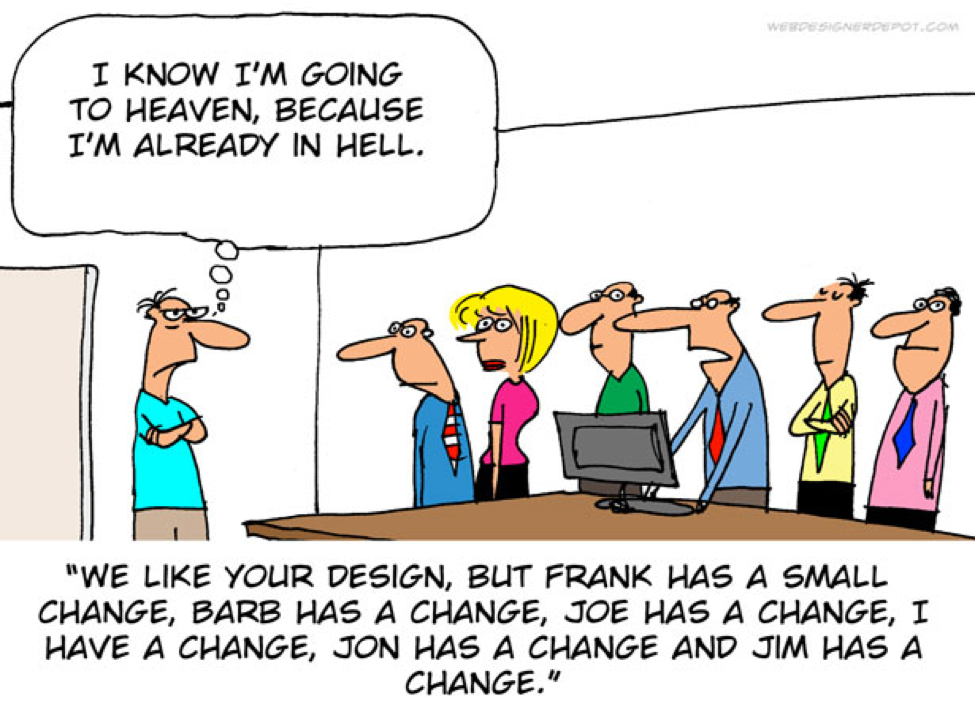 Too many opinions are devastating to your redesign. The only opinion that counts is that of your visitor. But that opinion is often not heard.

It’s highly likely that a radical redesign will have a negative ROI (even though the person who commissioned the project expected a positive one). Think about the time (at least 6 months) and the cost (developers, designers) of a project like this. If this redesign turns out to have lowered conversions, you just wasted a ton of time and money.

Now that downward turn in conversions means you have to scramble to figure out the cause and fix it. Problem is: it could be a ton of things. Hence it’s not going to be an easy fix and it will take time to get your conversions and revenue back on track.

If you had spent that same amount of time and budget (or even a lot less time and budget) on an evolutionary redesign instead of a radical redesign, your ROI would’ve been positive.

Not doing a radical redesign doesn’t mean that you should never change your site. It just means that you should change it step-by-step. You should support each step with data that you get from an A/B test. In other words, you test a change and then implement the winner of that test. You test another change. And implement that winner. This way, you are 100% certain that each change you make will bring in more money.

That is called evolutionary (re)design. In contrast to a radical redesign where you blow up the whole site at once.

The most well-known example of an evolutionary redesign approach is undoubtedly Amazon. Amazon has never made a completely new site. Each change is thoroughly tested. Because of that, Amazon has made their site into a converting machine.

At first glance, you might even think that Amazon’s site has never changed. But if you go back in time, you notice that their design looks completely different than it did several years ago. That change came step by step. That has certainly not done Amazon any harm. 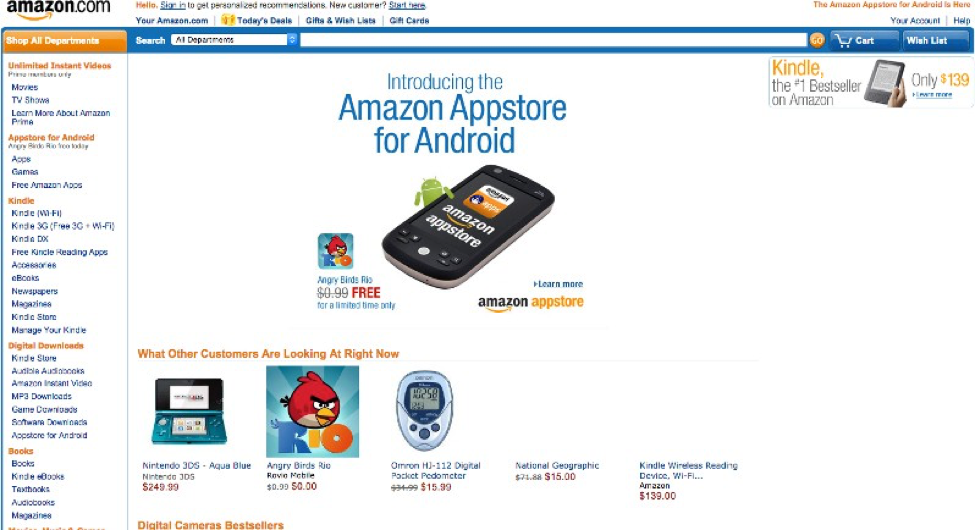 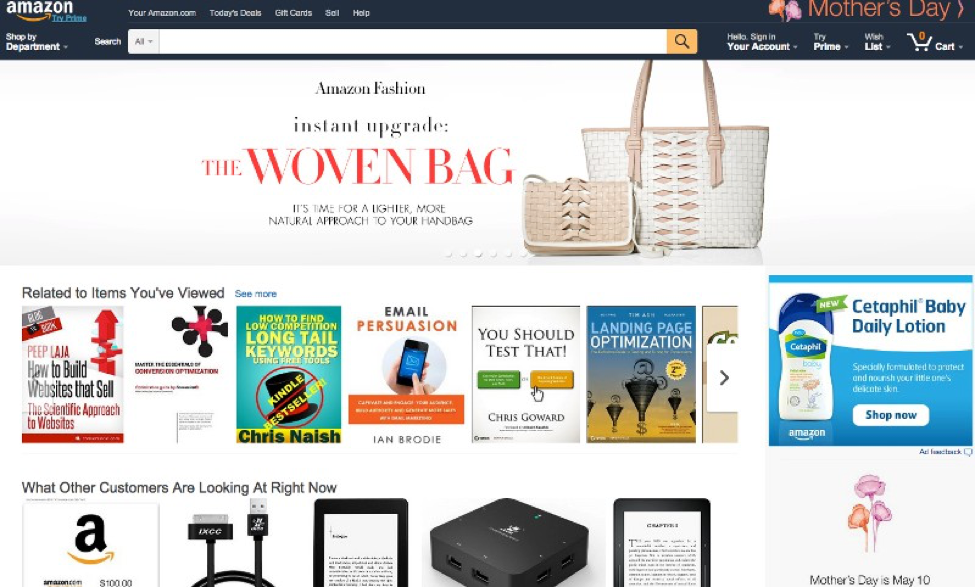 When An Evolutionary Redesign Is Better

Evolutionary redesign should be your default choice. If your existing design is ‘good enough’ and you have lots of returning customers who are accustomed to the current design, then there is no doubt. An evolutionary redesign is the only way to give your site a new look and boost your conversions and revenue with certainty.

There are lots of huge e-commerce stores that understand the power and ROI of evolutionary design, aside from Amazon, including Asos and Booking.com.

When A Radical Redesign Is Indicated

I typically argue for an evolutionary approach, but in certain cases, a radical redesign can be a smarter choice.

How You Minimize The Risk Of A Radical Redesign Failure

Before you even start to think about what your new design should look like, do a complete conversion research. That is the only way to discover what you can do better and where you should devote extra attention during the redesign phase.

With conversion research, you discover what works well and what you shouldn’t change. If your customers flow well through your checkout, then keep the current checkout. You can connect it to the new look and feel, but keep the flow.

A conversion research will also give you a better understanding of your visitor. If you understand your visitor better, you can serve them better and coordinate your redesign to what they want.

Don’t create your site in your ivory tower. Do constant user tests to see what your customers experience. You don’t have to wait for your site to go live. You can use user tests in all the phases of the redesign process. For one of our 7 figure clients, we found through user testing that people in the checkout thought you could only purchase with AmazonPay or PayPal because those buttons show up first. It seems like the checkout should be clear enough, but to the average user it wasn’t.

The same applies for SEO. Your designer or developer is good at design or development, but they aren’t not SEO experts. Ensure that you don’t suddenly plummet in the rankings because of your redesign. Involve your SEO expert in the process.

Save Your Old Site

Keep your old site on hand so that you can switch back if the results are disappointing. Don’t immediately throw in the towel, though. Sometimes it takes several days to see results. Your returning customers sometimes have to get used to the new design.

Going Live Is Not The End

Be aware that taking your new site live is not the finish line. It’s a new starting line. You have to continuously optimize. Ask for feedback from your visitors as soon as your new site is live. Keep an eye on your analytics, your scroll maps, click maps, etc., to further adjust the design as a function of the data and the feedback that you collect.

Minimize The Risk Of Failure

If you’re doing a radical redesign soon, ask yourself what the best approach is. Perhaps an evolutionary redesign is a better choice for you. Don’t think so? Then certainly follow my tips above to minimize the risk of a failure.

This website uses cookies to improve your experience while you navigate through the website. Out of these, the cookies that are categorized as necessary are stored on your browser as they are essential for the working of basic functionalities of the website. We also use third-party cookies that help us analyze and understand how you use this website. These cookies will be stored in your browser only with your consent. You also have the option to opt-out of these cookies. But opting out of some of these cookies may affect your browsing experience.
Necessary Always Enabled
Necessary cookies are absolutely essential for the website to function properly. This category only includes cookies that ensures basic functionalities and security features of the website. These cookies do not store any personal information.
Non-necessary
Any cookies that may not be particularly necessary for the website to function and is used specifically to collect user personal data via analytics, ads, other embedded contents are termed as non-necessary cookies. It is mandatory to procure user consent prior to running these cookies on your website.
SAVE & ACCEPT