I’m not exactly saying anything earth-shaking when I say that a fast site is important.

For a marketer or ecommerce store owner, though, this becomes a pretty technical story quite quickly. And then there may be a tendency to shove it to the side and do other things. But that does not have to be the case. Guillaume Derolez, software engineer at Google, gave an interesting presentation during the ‘Conversions at Google’ event, one that is also understandable for non-techies. He focused especially on the speed of mobile sites, but many things also apply to the desktop and tablet version of your site.

How fast does your site have to be? And what can the impact be of a faster site? But above all: how do you make it faster? Guillaume Derolez covered these and other questions in a very accessible way in this presentation. A handy, easy-to-understand basic explanation for non-techies.

No time or not in the mood to watch the whole video? No problem! This is the summary:

A fast (mobile) site is a conversion booster. Intuitively, you already know that, but when you see the numbers, it’s often still impressive. Amazon, for example, saw their revenue increase by 1% due to making their site just 100 ms faster. One percent might seem small, but for Amazon, it of course translates to a huge amount of money.

But it’s not only Amazon. This major US retailer saw a 27% increase in the conversion rate when the mobile pages loaded 1 second faster:

But there are other impressive examples:

Mobile sites: performance constrained, but your visitors have high expectations

If you also look at the evolution of mobile sites, you’ll see that they have often become much heavier. In 2011, the average mobile page was 390 kilobytes. Today, that’s 3x more. Sites are becoming increasingly complex. But your site visitor is becoming increasingly impatient. Research has shown that:

Knowing that mobile traffic has surpassed desktop traffic since November 2016, it becomes clear that optimising your mobile site is definitely a smart move.

But how fast should your mobile site be?

Google recommends that you aim for 1 second. That is quite ambitious. It is not easy because you will have to make rigorous and sometimes painful decisions to get there. In any case, you must try to get under 3 seconds.

Important side note: Speed is partly perception. Your user doesn’t care if he is on 3G, 4G or Wi-Fi. He just wants your site to be fast, regardless of the network. Which, of course, is an additional challenge, since if your user is on a 3G network, you have already lost 600 ms to ‘overhead’ because of the network. That leaves just 400ms to work with, which is very tight.

Of course, your page does not have to load completely in that one second, which would be as good as impossible, but if the section above the fold is loaded, so your site becomes usable, that’s good enough.

What makes a site slow, and what can you do about it? These are some of the most common issues:

On average, images account for 67% of total page size. If you make your page 250 kB lighter by optimising images, that translates to 1.25 seconds on a 3G network. There are different options for this:

An e-commerce site often contains more Javascript than images. And so we should look not only at the optimisation of the images, we should also try to optimise the Javascript.

Research has shown that 68% of websites load more than 50 resources on mobile. That means there are too many requests made, which makes the site slower.

Some things you can do:

Every redirect takes time. For example, if you send an AdWords ad to a particular page, that is already a redirect to your site. If you then redirect to the mobile version of your site (e.g. m.example.com), you will even lose more time. You can easily already be up to 2 seconds, and there is still nothing shown to your visitor, as illustrated here: 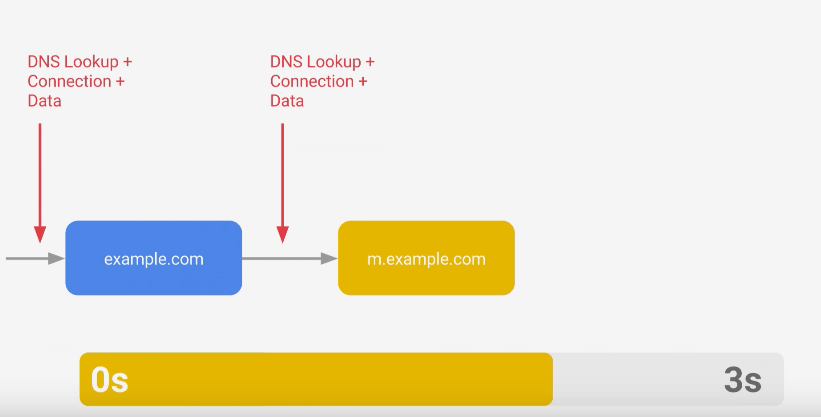 With a responsive site, though, this is not an issue because there is no separate mobile version that your user is redirected to.

A faster (mobile) site can significantly boost your conversions. Generally, the development time required for this is relatively limited. Certainly if you are currently well above 3 seconds, there is undoubtedly a lot of ‘low-hanging fruit’. If you do not yet have one of the things above in order, start there. It will definitely benefit your conversions.